The Pulitzer Prize Committee must reserve an award right now for the New York Times and British journalist Carlotta Gall. I feel safe in writing that no more courageous or important piece of journalism will be published this year than Gall’s Sunday, May 22 Times report revealing the role of Saudi Arabia in transforming Kosovo from a tolerant traditional Islamic society into a recruiting ground for ISIS by using Saudi money, violence and generational conflict to spread Wahhabism.

Perhaps even more important than the situation in Kosovo, the report allows us to glimpse Saudi Arabia’s global ambition to subvert all of Islam to the extreme, distorted and violent sect that owes its political allegiance to Saudi Arabia and provides the theoretical framework for ISIS. Cultural and regional differences (and the 15% who are Shiites) will put some of the world’s 2 billion Muslims out of ISIS reach, but even a quarter of that number will shift political conditions worldwide.

Here is Wikipedia’s take on the relationship between Wahhabism and the Saudi government:

“The alliance between followers of ibn Abd al-Wahhab and Muhammad bin Saud’s successors (the House of Saud) proved to be a rather durable alliance. The house of bin Saud continued to maintain its politico-religious alliance with the Wahhabi sect through the waxing and waning of its own political fortunes over the next 150 years, through to its eventual proclamation of the Kingdom of Saudi Arabia in 1932, and then afterwards, on into modern times. Today Mohammed bin Abd Al-Wahhab’s teachings are state-sponsored and are the official form of Sunni Islam in 21st century Saudi Arabia.” 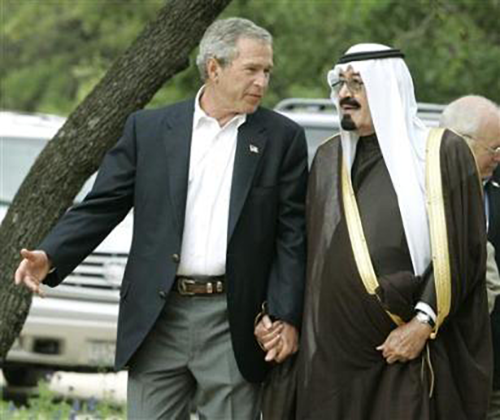 A state can sponsor a religion and most states have until modern times. The alliance between the Book and the Sword is powerful and serves to maintain those in power in both hierarchies. No surprise there. My problem is with the ongoing attempt by the US government and the Saudi government to pretend that ISIS, Wahhabism and the Saudi Government are not connected. We have been quick to denounce “state sponsored terrorism,” especially in the case of Iran and Hezbollah. We have choked on making the same connection where the Saudis are concerned.

When a Saudi charity supports a group, a plan, or any effort at religious or political change, the Saudi government is involved. To claim otherwise is to insist on a distinction without a difference.

The official line of both the Bush II and the Obama Administrations and Saudi Arabia has been that while some members of the royal family may have provided shelter and financial support to the 9/11 high jackers, the Saudi ”government” was not involved. (Fifteen of the 19 men who carried out the 9/11 attack were Saudis, two were from the United Arab Emirates, one from Egypt and one from Lebanon.) But now that Congress is considering actions to make public 28 heretofore secret pages of the 9/11 report, the Saudi government is threatening to sell it’s US assets and to take other punitive actions. The Obama Administration is opposing the release. To President Obama’s credit, he has at least called out the Saudi’s for living safely beneath the American defense umbrella while doing little to help, but the Administration has been feeble in connecting ISIS and Saudi money. Without good reporting, like the piece by Gall, both governments would be able to continue the charade that Saudi Arabia is a staunch American ally. We understand about the oil. We understand that Saudi Arabia has been a little less belligerent about Israel than has Iran. We understand that the 30 million Saudi’s do not represent a credible threat as a traditional army. But, with enough money and a powerful, appealing (to some) ideology/theology and the internet the Saudi’s can change the world we live in while the US pretends they are our best friends.

To its great credit, the New York Times and journalists like Gall have pierced the veil. It is up to the next US administration to take appropriate action, including steps to remain independent of Saudi oil, which is what got us here in the beginning.